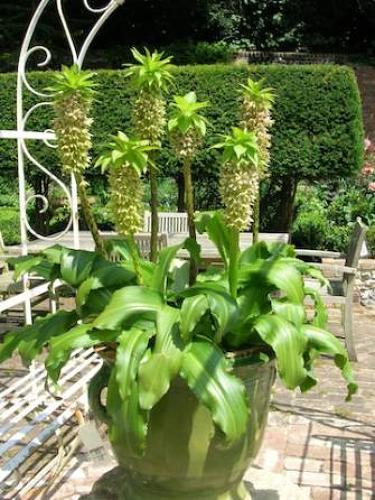 We`ve had an extraordinary cast of gardeners at the shop over the years.

When I bought 30 High Street the garden consisted of a lawn,  an ancient apple tree and a chain link fence between my half of the garden and next door.

Having sold my soul to the Midland Bank for the £83,000 it cost to buy the building,  I wasn`t in the mood to borrow more.  The day I completed the purchase the "FOR SALE" boards went up on the shop next door. This included the other half of the walled garden on the other side of the chain link,  as well as a ramshackle length of outhouses which were to become my workshops.

It seemed like a good deal at the time.  I never dreamt that the business would grow to need that shop too - nor that that it would catch fire some years later causing me two years in scaffolding and 500,000 gallons of Fire Brigade water through the roof!

Along with the property I inherited an ancient gardener called Mr Ayling.  I never knew his christian name.   He used to arrive every Friday morning whatever the weather,  and immediately head for the garden shed.  Where he would spend a great deal of the day.

Mr Ayling was short,  stooped and bearded,  and with his fork in hand looked exactly like a garden gnome. He came to 30 High Street every Friday of my first ten years in the building and then we received word he had been taken to the local cottage hospital where he spent the last few years of his life hiding in wardrobes and bursting out on unsuspecting nurses.

Mr Ayling`s successor I dubbed "Looby Loo."   It was all to do with Bill and Ben and the flower pot men.  Ewan,  an excellent young Scot  was working with me then.  We used to play tricks on each other mercilessly.  One day when I heard someone approaching the office,  expecting it to be Ewan,   I scattered the contents of the wastepaper basket on the floor and lay down motionless as if dead,  with the wastepaper basket on my head.  I was somewhat embarrassed to see Looby Loo approaching,  should I get up?  Should I lie dead?

I lay dead. Looby Loo stepped across me silently,  and walked out into the garden as if this was all quite normal behaviour.

Looby Loo was succeeded by a 75 year old leather clad biker who,  I swear was called Gordon Bennett.  He had peculiar David Dickinson coloured skin which hung in reptilian creases across his bare chest.  It was a scary sight.  He would strip to the waist at any hint of sunshine, seeking out the shoulders of the most expensive marble statue on which to hang his biker`s leather jacket on.

Our gardener today is the very able and very masculine Malcolm who, with Freya, has transformed the patch of dry earth to the glories you see to the left of this column.