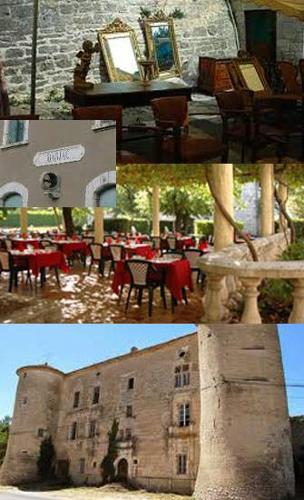 Open air antiques fairs have the weirdest opening day rituals imaginable...but none was stranger than Barjac.

An ancient mountain town, Barjac stands defiantly where the Ardeches mountains meet the Cevennes to the north west of Avignon.

For many of us, the deballage in the dusty town square was a rite of spring and late summer.

Two hundred brocanteurs would disgorge filthy unworldly goods from rusty vans. Some of the goods, and their owners, were so primitive you would swear they lived  in caves.

The market had the strangest starting time of all the fairs I have ever been to. No one was allowed to open their vans, not a single duck pot could be unloaded, not a rope untied on any roof rack, until the town clock struck 4pm.

What an extraordinary hour to begin a fair! But those were the rules: undoubtedly designed to ensure the french had a good lunch first.

The trouble was, although we all knew it couldn`t start until 4pm, no one could be quite sure on which day it would take place! In pre-internet,pre-ruthless timetabled, utterly shambolic but oh-so captivating France, this was quite the norm for antiques fairs.

We knew it would always be in the week of  Easter, (Paques), and that it would co-incide with another religious holiday, whose name escapes me, in the first two weeks of August.

We might not know what day, but we could always be certain it wouldn`t be before the clock struck 4pm.

The town square was patrolled by the local gendarmes. Any poor dealer who opened their vans before the appointed hour, would be subjected to an on-the-spot fine and be banned from selling that day and at future Barjacs.

Of course none of this deterred us hunter gatherer dealers from arriving at breakfast time in the hope of prising something off a roof rack when the gendarmes weren`t looking.

That was a long, long day walking round and round that small square. At noon huge plates of near raw onglet and platters of frites and jugs of coarse red wine were served from grills in the grounds of a big chateau alongside the square. It had a stream, huge thickets of bamboo and dozens of ducks. It sounds glamourous.

If the steak was indigestible it was made worse by the fear that maybe this would be the year they started it before the clock struck four and you`d be caught half way through your creme brulee!

The fair was organised by one Mme Tassy. Now I was never quite sure who she was but I`m pretty certain she was a lady with a liking for lots of make-up and a love of shiny leather trousers (incongruous in a rural setting). I`m pretty sure she also had a wooden leg. She and her brother started out beneath a tree. It was the only stall without a number, only a name: Mme Tassy. One year I remember a vast primitive table made from the trunk and branches of a tree.

Another year I bought a huge grain-painted mirror, only to discover it was a classic brass bistro mirror (the biggest and best ever) below the paint.

We used to stay nearby at Orgnal L`Aven. The somewhat basic hotel had an extraordinary restaurant which felt like the dining room on a 1950`s ocean liner. I remember it had an amazing Terrazza marble floor and a huge crystal chandelier. Freya says I have imagined both. She remembers it being like a boarding school dining hall with long formica tables and chairs. In summer we ate in the garden beneath a canopy of trees. we never really knew what we were going to be served: One year it was a small songbird with its head and tail feathers still attached to its scrawny roasted body. Deeply upsetting.

The rooms were pretty basic. The walls were painted purple and brown. You could hear the man in the room next door snoring-worse in the morning. One year there was a scorpion in the bath. Another time we were kept awake all night by local youths performing a Moto GP on ancient Vespas in the road outside.

Like everywhere it ain`t what it was. The town authorities relaxed the 4pm rule and allowed an earlier start. Parisian dealers started outnumbering the local brocanteur sellers. Goods got harder to come by. Duck pots became extinct. Mme Tassy probably gave herself a stall number. The stalls started spilling out into all the streets of the town.

The restaurants acquired plate glass doors and tablecloths - and the hunter gatherers moved on.