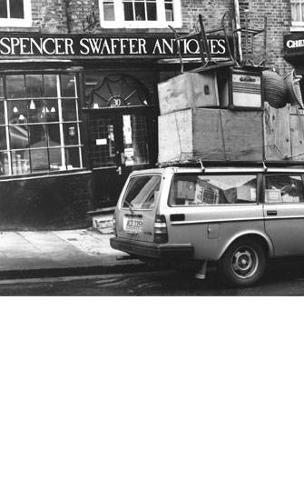 Antiques dealers by definition spend their lives dealing in the past. I promise this diary will not dwell too much on the past. There’s nothing worse than a bunch of tired men bemoaning what used to be. So here goes – with some reminiscences of mine! Brought on by a recent trip to Edinburgh. Perhaps nowhere in the British Isles is the disappearance of the antiques shop more dramatic than in Edinburgh. Where almost every city centre street harboured a multitude of shops and characters – one is hard-pressed to find any dealers to call on today.

Thistle Street was home to the late Kenneth Jackson, a man of great taste and bitter humour, who more than once greeted me at the shop door fresh from his bath, wearing just a pink silk bath robe! Nearby was Aldric Young a man of bitter moods as ill-tempered as the parrot he kept in a cage in the showrooms. Eric Davidson, when in The Grassmarket, was so successful he had a fleet of luxury vintage cars all with the rather expensive registration numbers S1 and S2: You used to go into his cavernous building and everything would be sold, bearing the shipping stickers of buyers from North Carolina and Tennessee.

I still see Eric in Paris, where he has operated for many years from the edge of the Marche Biron. Carolyn Scott has long since departed St Stephen’s Street for the art classes in a low lying valley with its own micro climate in Angus. Miss Scott not the tallest of girls liked nothing more than a 14’ high 20’ long bookcase – which she could single–handed – hand strip – usually wearing a pink mini skirt.

Edinburgh dealers of that time obviously had a thing for pink! Dermot and Jill Palmer and I used to do our bi-monthly trips to Scotland; it would take us two days to do all the shops in Edingburgh.

On my recent visit it took me half an afternoon: and most of that was spent searching streets for long-gone dealers and gasping the dealers’ lament of “I remember who…….”

It made me all the more determined to stay at 30 High Street: my dealing home for these past 40 years!