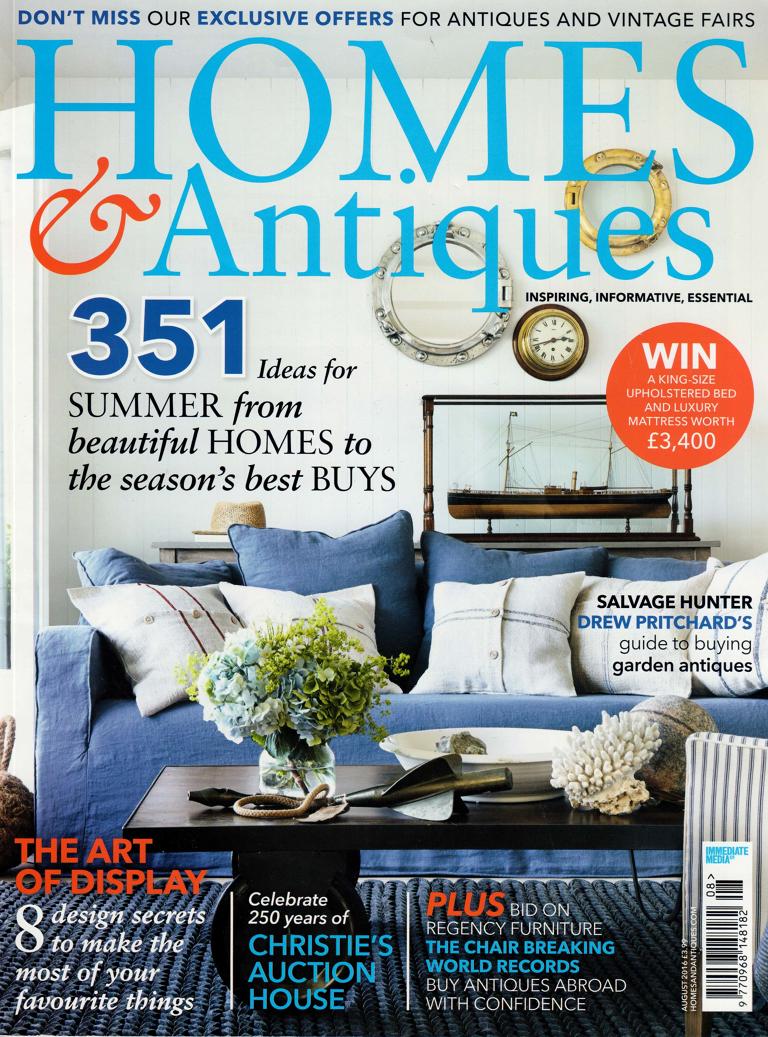 Antiques dealers Spencer and Freya Swaffer have a love of items with character and sometimes spend years hunting down just the right piece. The result is a home filled with much-loved, highly valued collections.

Most of us can't remember the specifics of the first antique we bought. You might remember what type of object it was, but its age and how much it cost are often details long forgotten. Not so for Spencer Swaffer. His first purchase was a set of three ancient Egyptian scarab beads from a Brighton jumble sale, bought when he was 11 years old. 'They cost me six pence. The following year I sold them and some other archaeological finds to a dealer for £50,' he says. And so began his carreer in antiques. After a stint working as a reporter for the local news paper, (when, during his free time, he would keep his eyes peedled for antiques to buy and sell), he opened his eponymous shop in Arundel, where 40 years later he still deals in his favourite things.

Fortunatley, his wife Freya shares Spencer's love of 'folky, rare' items and has her own connection with antiques. 'My father is a dealer in ethnic and tribal art so I grew up around wonderful pieces. I adored his collections and wanted to be an archaeologist until I was told that I'd need a degree in maths,' she says. When asked what it is that appeals to her about old pieces, she says. 'Antiques have a character and sould and some pieces just speak to you. Take the Swedish folk art goose in our living room. It was probably made by a grandfather for his grandchild. It's the story that a piece tells that draws me in. You can look at it and see the love that went into creating it. The reason, the thought, care and energy - the object is imbued with all those things. '

This thoughtful outlook to antiques has been applied to the Swaffers' home, too - a Georgian townhouse that they've lived in for 17 years. Often, when they coudln't find that perfect piece to inhabit a particular spot, they waited many years to discover the right object. This goes for the Italian well head in the garden (found two summers ago and lifted into place by four men), Spencer's mid century inspired armchair, and the living room fireplace. 'The original fireplace had been replaced with an Edwardian design and after 15 years of hunting for the right Georgian example, I spotted this in Spencer's warehouse and told him "That's the one!"' Then there are the pieces that have been with the couple for years - Spencer's walking sticks, the collection of decoy pigeons that has been expanding for 26 years and the subconcious accumilation of other decorative birds. Freya's favourite piece though, is the carved cat in her studio. 'I spotted it in a shop in Petworth and nearly cried when I saw that it had a red sticker on it.' she says. 'Spencer contacted the shop owner who was then able to to tempt the buyer (also a dealer) into returning it. Spencer suprised me with it on my birthday. It's only around 50 years old but it to got me.'

What attracted Freya to the house was its Georgian proportions and symmetry, yet despite its age and impressive facade 'it feels homely and not at all grand,' she says. It came with a good story, too. 'The house belonged to a brewer called George Constable. White he was living here, he befriended the artist John Constable, who taught hum how to paint - which was extraordinary. Arundel Mill and Castle was the last painting he worked on so perhaps he spent some of his later years here, staying with George,' says Freya. Its artistic heritage seems fitting given the couple's fondness for contemporary art, an element that keeps the home feeling modern, despite its many antiques. 'Spencer always says that we're in the fashion business,' says Freya. 'We appreciate different pieces at different times and I'm forever tweaking things. At the moment, our look is quite paired down and simple and that's what we look for in pieces that we bring home. It's a peacful look to live with.'